"Eyes on the Stars"

Neglected at the beginning, but once the story about the Beagle on the dial was properly told (like we did here), Speedmaster and Apollo 13 fans started the hunt for one of the 5441 Speedmaster Professional Snoopy watches that Omega produced. It is a perfect year to buy this Speedmaster Snoopy Award as we are celebrating the 50th anniversary of Apollo 13. Together with successful Apollo 11 moonlanding, the best-known NASA mission. 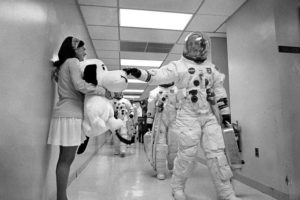 “In May 1969, the Apollo 10 mission flew to the moon to do the final checks in order for the following mission, Apollo 11, to land on the Moon. The Apollo 10 mission required the Lunar Module (LM) to check the moon’s surface from nearby and “snoop around” to find a landing site for Apollo 11. Because of this, the Apollo 10 crew (Gene Cernan, John Young and Thomas Stafford) named the LM “Snoopy.” The Apollo CM (command module) was nicknamed “Charlie Brown.”. See the above Apollo 10 crew photo, taken by NASA.

Fast-forward to 1970. In the interim, humans had set foot on the moon and, about one year later, the Apollo 13 mission was meant to bring another team of NASA astronauts to the Moon (Lovell, Swigert and Haise). The mission’s objective was to explorer a certain area on the moon called the Fra Mauro formation. It didn’t get that far, as there was an explosion on board the service module at approximately 200,000 miles distance from Earth.” – from our article here.

The 2003 Speedmaster Snoopy is a bit more low-profile than the later Silver Snoopy Award edition that Omega introduced in 2015. Only the Snoopy “Eyes on the Stars” patch at 9 o’clock reveals you are dealing with something special here. When you turn the watch around, you will immediately see the colorful caseback, with the huge Snoopy “Eyes on the Stars” patch underneath the sapphire crystal. It is not every day that we come across a near mint Omega Speedmaster Snoopy (reference 3578.51.00) set like this. It comes with the original Omega Speedmaster Snoopy box and the certificate of authenticity with the matching number printed in there.

To quote our Editor-in-Chief Robert-Jan Broer: “In 2003 I missed out on this watch, but I made up for it when I came across a NOS set in 2013. I had to fly to New York to get it, together with an Apollo XIII edition from 1995, commemorating the same NASA mission. The little patch at 9 o’clock makes it visible to other Speedy fans who are in the know, that you’re dealing with something special here. The later 2015 reference was less subtle but still beautiful though.”

An in-depth article on this watch can be found here on Fratello’s magazine.

When buying pre-owned, the condition is key. That’s what we fully understand here at Fratello, as we are collectors ourselves for many years (decades). We purchased this watch from a collector who has kept it in a safe for collecting purposes only, so it is in beautiful condition as shown in the pictures. The watch is in good running condition, but we did not open the case to keep it intact. It is a collector’s item, and we treat it as such. We do encourage you to wear it though, as we do with our own Snoopy and other Speedmaster collectors’ watches. You will find some fingerprints on the watch, but no real signs of use/wear. The packaging is in original condition and comes with the original Certificate of Authenticity, all with matching numbers. The international warranty card is in the cardholder but is not stamped and filled in. If you don’t own a Snoopy Award yet, this is the best to have.