In 2006, Omega introduced this limited edition Speedmaster Professional to commemorate the 35th anniversary of the Apollo 15 mission. On this mission, NASA astronauts Scott, Worden, and Irwin traveled to the Moon and were the first to drive the lunar rover on the Moon surface (see NASA’s image below). 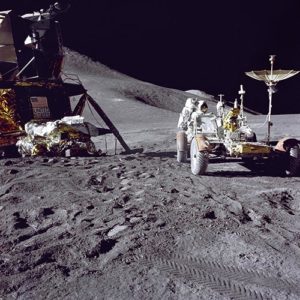 This Speedmaster Professional reference 3366.51 is not the first model to come in (pink) gold and steel, but there aren’t many out there either. In the early 1980s, Omega started experimenting with bi-color Speedmasters for the first time. This Speedmaster Apollo 15 35th anniversary edition was perhaps its time ahead, as we only see the interest in gold and bi-color watches increasing again. This watch was limited to 1971 pieces and we have to admit, that we don’t come across one very often. Even during our Speedy Tuesday World Tour that we did last year and where we met with hundreds of fans, I can’t recall seeing one in the flesh.

“That’s why I find this Omega Speedmaster Professional Apollo 15 35th anniversary edition from 2006 so fascinating. It is a bi-color watch, which is somewhat more divisive, to begin with. Less controversially, however, it has the Apollo 15 mission patch on the case back — that’s an elegant touch that I’m sure few would find unappealing.” – Robert-Jan Broer in this article on Fratello’s magazine.