In 1994, Apollo XI was just 25 years ago and Omega celebrated this with a number of limited edition Speedmaster models. This stainless steel Speedmaster is one of them, limited to 2500 pieces only. The first Apollo XI commemorative edition is, of course, the gold watch from 1969, but since 1989, Omega also started introducing Apollo XI limited edition watches in stainless steel. In fact, this watch isn’t that much different from the 1989 20th anniversary edition. 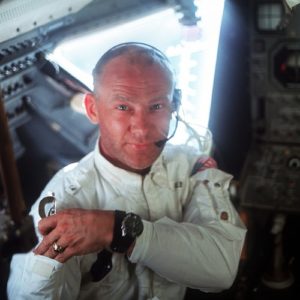 Edwin “Buzz” Aldrin, Neil Armstrong and Michael Collins have been wearing the Speedmaster Professional during the Apollo 11 mission in 1969. On the picture above (image credit NASA), you can see Buzz Aldrin wearing his Speedmaster Professional (reference 105.012). This Omega Speedmaster Professional Apollo 11 Anniversary Edition from 1994 (reference 3591.50) has a commemorative engraving in the case band, reading “Apollo XI 1994 – 1969”. The dial and hands are from the tritium era, so they have this nice yellow-ish patina. Inside you will find caliber 861, which was introduced in 1968 and succeeded by the caliber 1861 in 1997. This neo-vintage watch has all the cool features that you want from a vintage watch, but modern enough to be worn daily.

The Speedmaster Apollo 11 and Apollo 13 models seem to perform best in terms of demand when it comes to limited editions. However, the watch we have here is not in “collector’s condition” and does not have the original wooden box, patch, and certificate. More information in the condition paragraph below.

Besides this steel model, of which Omega produced 2500 pieces worldwide, they also did 999 watches in steel for the Italian market with a sapphire caseback (and caliber 863), 500 watches in white gold with a chronometer (caliber 864 movement) and 50 skeletonized watches in platinum. In this article on Fratello’s Magazine, you will find an overview of all Speedmaster watches that commemorate Apollo 11.

You will find a great daily companion in this watch though, with its sought-after and much-appreciated reference 1479 bracelet (with 812 end pieces) that gives the watch a great look and feel. It is also a great looker on a leather strap, NATO or Velcro strap.

When buying pre-owned, the condition is key. That’s what we fully understand here at Fratello, as we are collectors ourselves for many years (decades). This watch has been worn and it shows. It is an “honest” watch, with definitely visible marks and scratches due to use. The box and papers are time correct but do NOT belong to this watch and therefor add NO value. The bracelet is in good condition, no stretch, but the black filling is missing from the engraving. This also applies to the case back engraving. The tritium aged nicely on the dial but turned dark on the hands. For daily use, it is a nice neo-vintage watch that will do the job fine.