The Speedmaster Professional “From the Moon to Mars” was introduced in 2004, during Baselworld and by no other persons than astronaut Eugene Cernan and Swatch Group CEO Nicolas Hayek. Interestingly enough, it was not limited but numbered and only in production from 2004 till 2012. According to Moonwatch Only, the production ceased in 2012 when more than 6000 watches were produced. 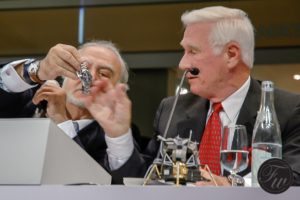 On the dial of the watch, you will find images of the Earth, Moon, and Mars. It seems Omega wanted to be on top of the game when NASA would head for manned space missions to Mars. This watch was never one of our editor’s favorites, except Gerard Nijenbrinks. However, we do see the attractiveness in the watch now more than when it came out in 2004. The printing of the planets isn’t super fine or delicate, especially up close, but it does bring color to the dial. You will also find that some of these watches have discolored over time, giving the watch its own unique color tone. On the case back, there’s the standard “Flight-Qualified by NASA for all manned space missions” engraving, but “From the Moon to Mars” has been added on the lower half, followed by its unique number.

This watch comes with the famous red leather box (in good condition), white cardboard box, and the red Omega instruction manual, a white leather cardholder with International Warranty Card, and the pictograms card.