The blue panda dial Speedmaster Gemini IV from 2005 is a sought-after watch for quite some years now. The blue dial with silvery-white subdials makes it stand out from all the black dialed Speedmasters out there. Just like the 2003 Snoopy, this watch has been neglected in its first few years of existence. The boost in collecting Speedmasters in the last 5 years made specific limited editions, like this Gemini IV reference 3565.80, hot items to collect.

This Speedmaster Gemini IV 40th Anniversary commemorates the 1965 mission and the first space walk of a NASA astronaut. It was performed by Ed White, while wearing two(!) Omega Speedmasters on his wrist. One of them is a reference 105.003 for sure, the other one is assumed to be a 105.003, as that was the only reference used by NASA at that time. 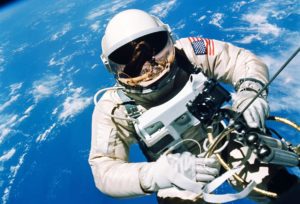 The vintage 105.003 is nicknamed Ed White, and so it the new caliber 321 Speedmaster watch that has been introduced earlier this year, but this Gemini IV blue panda still is a tribute to him and his fellow astronaut James McDivitt. McDivitt was a backup crew member for the fatal Apollo 1. He went on to fly as a commander on Apollo 9. Ed White died in a horrible accident with the Apollo 1, together with his fellow astronauts Gus Grissom, and Roger Chaffee.

Interesting about this Gemini IV is that it uses an unofficial mission patch on its caseback. Only since the following mission, Gemini V, it became a tradition for the astronauts to design their own mission patch. Before that time, astronauts just wore the American flag on their spacesuits.

When buying pre-owned, the condition is key. That’s what we fully understand here at Fratello, as we are collectors ourselves for many years (decades). The Gemini IV we are offering comes with boxes and papers. The watch is as shown in the pictures. The watch looks unworn, but there’s one visible scratch on one of the links (on the picture where you will see the watch laying diagonally, it is on the third link on the lower part of the bracelet). That’s the only visible mark we could find on this watch. On the clasp, you will see two small hairline scratches. All very small and acceptable, but we do let you know in advance. The bracelet is resized and two spare links are in the box. The white cardboard box, grey box and cardholder are all in good condition. The Certificate of Authenticity, International Warranty card and pictograms card are all there. In the white cardboard box you will find the red Omega instruction manual.